Reviews of My Books

In creating a “written time machine”, readers are drawn into a love of history which often translates into a desire to learn more about how people who came before us lived, learned and loved. Castles, Customs and Kings vibrantly illustrates the “commitment to research” common to all accomplished historical fiction writers, while also providing readers with a wonderful glimpse of times past ... many of the essays detail little known facts that rival the knowledge of even England’s finest historians.

The Companion of Lady Holmeshire These are partial reviews. Please visit the websites of the reviewers to read the entire article.
~~~~~~~~~~~~~

This is an elegant novel. I was quickly absorbed into it, finishing it over the course of a weekend. The characters are well drawn, the settings refined and the plot reminiscent of Jane Austen. The attention to historical detail is remarkable; the writing equal to the complexities of a plot which is as good as any Georgette Heyer novel.

Debra Brown has really knocked the ball out of the park with The Companion of Lady Holmeshire. For a debut novel I was absolutely floored about how historically detailed the novel was. The end of the novel was one huge surprise, that felt never-ending. Just when you thought you found out all the secrets of Emma’s past, BAM! you’re hit with more. It’s these twists and turns of the plot that keep the story moving at an excellent pace and create a story with tons of character development. The story itself is told from several character’s perspectives and it amazed me that Brown was able to weave the stories together and pace them as beautifully as she did. Each character as well was a joy to follow, and with Brown’s characterizations you were either cheering or jeering them.

The Companion of Lady Holmeshire reminded me of a Jane Austen novel. Set in the Victorian period, it tells the tale of Miss Emma Carrington, an orphaned child, raised in the home of the Squire Carrington. She is later sent to work in the household of the Countess of Holmeshire. Emma becomes the companion of the Countess and is sent off to finishing school. Upon her return, she is introduced to the genteel members of society. Emma’s introduction to society causes outrage within the London ton.

I adored the characters Brown created; from the eccentric Countess; to the hopeful lady’s maid Anne. Brown weaves a delightful tale involving different ranks of society, from the poor to the Queen. The story offers romance, intrigue, and a compelling mystery with a shocker ending. The Companion of Lady Holmeshire is Debra Brown’s first published work, but it reads like those of a seasoned author. I am looking forward to Debra Brown’s next endeavor For the Skylark. I want to thank Debra Brown for the ARC in exchange for my unbiased review.

There is a cast of many interesting characters. I have to say, as well, that this read a lot like a variation of Upstairs, Downstairs. We are given a view of both the elite and servant classes through the cast of characters. It was fascinating.

Yet, what I enjoyed most was the surprises Brown managed to throw at me. None were what I expected and I appreciate that in an author. It was not till the end that all is revealed and I have a hunch Brown took a cue from Shakespeare’s Puck in a Midsummer Night’s Dream.

Debra Brown’s debut novel was a valiant and intriguing effort. Her writing style is sophisticated and on point and her ability to weave a story is unique and of a style I have not encountered before. I really enjoyed The Companion of Lady Holmeshire and wait for Brown’s next novel with anticipation.

The main plot of the book is both an exciting and interesting one. Not only does it touch upon the genre of historical romance, but it intertwines elements of mystery. I became engrossed in the story so much so that I felt as though I was part of it. It takes great skill to make a reader feel this way and I believe Debra Brown has done this very well. Brown wrote which such elegance that it is hard to believe this is only her debut novel. I commend Brown for her beautiful and believable descriptions. They enhanced the plot, rather than distract from it.

What I liked the most about this book was that it was intelligent. Just when I thought I had the plot and ending sussed, I was proven wrong. There are a lot of surprises along the way before ending with a beautifully tied-up conclusion. I wasn't expecting the plot to develop as it did and I was glad for this. The entire book was a beautiful, unpredictable, well-written and entertaining piece and I look forward to reading more from this talented Author.

I'm going to come right out and say that I loved this book. It was well written, meticulously researched, and beautifully brought together at the end with one shock revelation after another. It made many great moral points about social injustice without being either preachy or irrelevant to the modern reader, and it was very satisfying to see some of the more arrogant characters get their comeuppance. I thought the dialogue was especially good, and I warmed to Winnie and Wills from the beginning. I particularly loved the handling of the romance between servants Simon and Anne, and I found myself really liking Genevieve too, despite being convinced that I shouldn't because she was betrothed to Wilfred, our dashing hero. I enjoyed how that little love triangle worked out.

"The suspense builds and the ending will shock you. Beautifully written with vivid details, the characters clever and well developed and the suspense intricately woven, it's hard to believe this is Ms. Brown's debut novel. Her attention to detail shows she has definitely done her research on the period. I really enjoyed this glimpse into the past and look forward to future works of author Debra Brown's."

Although my book was written as Historical Fiction, Antoinette McKain of Kid Smart Books felt that it would be enjoyed by tweens and teens interested in that genre. I heartily agree, since I enjoyed such books at that age.

"Deborah Brown has mastered the genre of storytelling of historical, romanntic, mystery epochs and can spin a yarn right down to the Engish lisp and brogue. Is she our modern day Austen?
"For those of you who crave romantic intrigue combined with mystery, and humor - in all the right settings for all the right reasons- this is it."

I don't read a lot of historical romance, but I have enjoyed the few I've read. There is something educational about the period language and I feel a little smarter reading it:-) I can now add The Companion of Lady Holmeshire to the list of good historical reads. The author's description of the Victorian era is wonderful and makes you feel like you are there as you get involved in the story. I loved the characters, and I felt the emotion of Emma throughout her journey and was a cheerleader for her to the very end.
Ahhh, I love novels that leave you with warm fuzzies:-)

Please leave any comments on the Home page. Thank you! 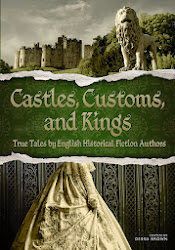